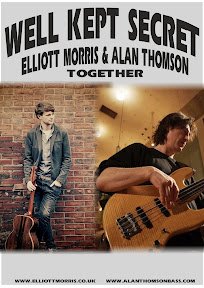 Elliott Morris is a young guitarist and singer/songwriter prominent in the Lincolnshire, UK music scene who is known for his ‘unorthodox’ style of percussive guitar. and winner of a prestigious Danny Kyle award at Celtic Connections in 2013.

Alan Thomson came from a musical background with both his father and grandfather being jazz musicians and his mother being a fine pianist and singer. He started (like many other kids) to learn to play the violin at age 5 and then moved onto the piano until at 13 years of age, he finally got a guitar. Along with bass player Neil Fairweather, drummer Tim Brittain, and sax/flute and guitarist David Roy, “The Arthur Trout Band” was formed and played in and around Glasgow from 1976-1980 also playing in the summer of 1980 at Stonehenge and Bristol Ashton Court festivals. An occasional visitor to the band rehearsals was David’s cousin, the now legendary Scottish singer/songwriter and innovative guitarist John Martyn.

John needed a bass player for his forthcoming Grace And Danger tour of the UK. Alan borrowed a fretless bass, practiced frantically for two weeks, auditioned and got the job, a relationship which

would last almost thirty years until John’s death. Through his association with John, Alan has recorded and performed with Phil Collins, Eric Clapton, Robert Palmer (for whom he wrote the B-side of the hit Addicted to Love), David Gilmour, Linda Lewis and Bert Jansch.